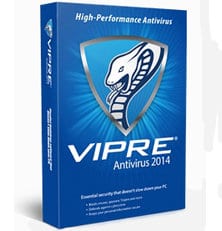 GFI Software, the owner of the VIPRE brand which was originally introduced to the security world by Sunbelt Software, appears to have made correct emphases in tailoring the new version of their antivirus product. Given the tendency of all-round versatility coming to the fore, it no longer suffices to ensure bare protection, so vendors are additionally focusing on increased usability and better user experience. Whereas installing the previous version of VIPRE Antivirus on infested systems could be problematic, and running system scans was a burden to both the customer and the machine it was on, the latest build has been declared to address these nuances, plus it’s claimed to deliver better protection against a broader set of malware.

According to GFI, this utility accommodates powerful next-generation antimalware engine, refined anti-rootkit technology, smart performance optimization tools, real-time system defense, email protection, irrecoverable removal of sensitive data, and a number of remote device scanning options. Furthermore, this antivirus will be greatly appreciated by those who seek to protect up to as many as 10 computers, with the $59.99 worth 1-year offer. In our test we checked to which extent the claimed improvements turned out a success, and how good VIPRE Antivirus 2014 actually is from the end user perspective. 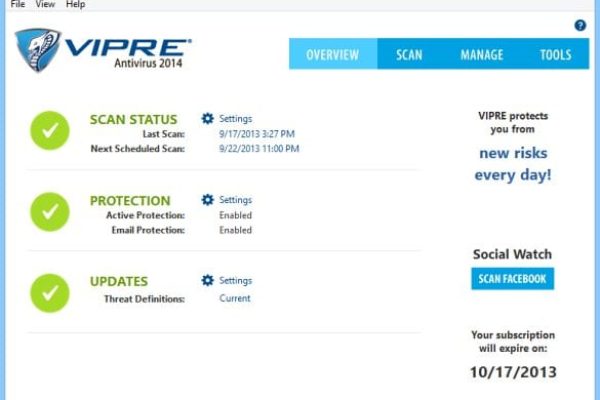 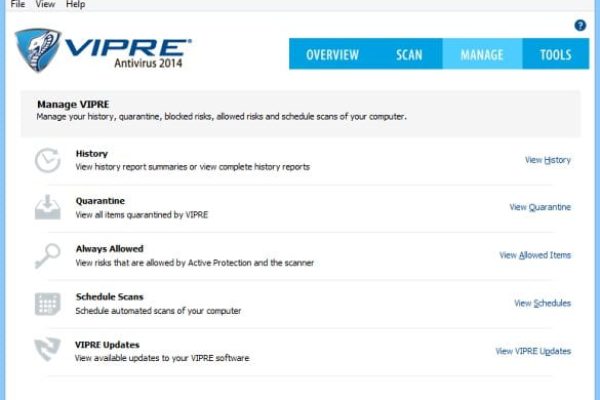 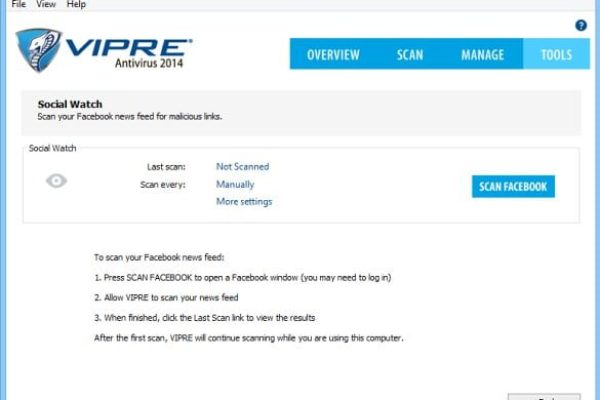 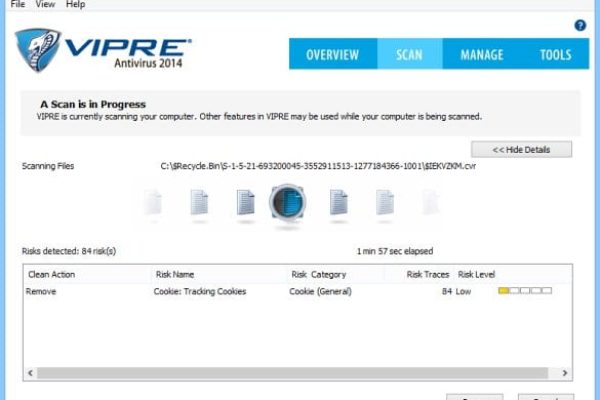 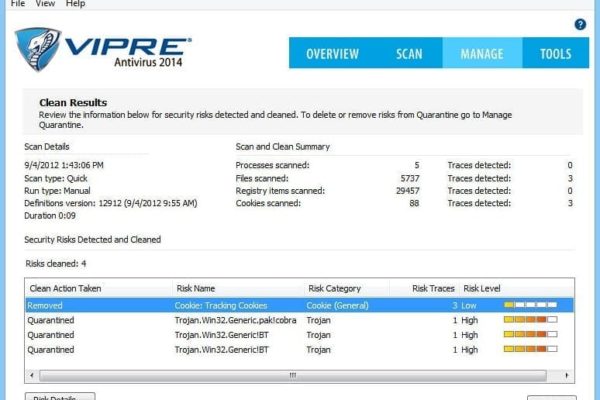 Comparing VIPRE’s 30-day free trial offer with other evaluation versions across the competition, it turned out pretty surprising to learn what’s included. You get fully functional protection against viruses and other PC threats (both detection and removal), and free tech support by chat, forum or phone – the latter being particularly flattering.

Installation went by smooth, quite in contrast to the forerunning version we mentioned. The setup process now requires a minimum of user interaction and completes within a very reasonable time. This is largely due to the fact it’s the main software modules alone that get downloaded during the install, the signature database being downloaded afterwards. A 1-year license for 1 computer will cost you $39.99 – not the lowest price we’ve seen across the board though. Overall, we had no issues whatsoever with the setup, so this is evidently a step forward for VIPRE in winning more clients. Just one more thing to outline here is that at the end of the install process you are suggested to opt into joining the ThreatNet which is a network of tens of thousands computers running VIPRE products all over the globe. TheatNet is intended to contribute to better responsiveness when it comes to new, or 0-day, malware samples.

Although scan time is claimed to have been reduced, this wasn’t really the case in our test. Actually, lengthiness was something we noticed about the initial full scan which normally tends to take longer with this sort of applications. Subsequent ones took notably shorter time frames to monitor the entire operating system.

The user interface, which underwent no significant modifications as compared with the 2012 version, is all simplicity, with nothing redundant or complicated in it. The GUI is composed of 4 main navigation buttons lined along the top part of it: Overview, Scan, Manage, and Tools. The Overview tab provides details about scan status, protection and updates, with configuration buttons linked to, next to each of these items. You also get unambiguous representation of your statuses by the above criteria – that’s owing to the large graphical icons that you won’t fail noticing.

Scan parameters are straightforward and not crammed up with any sort of overly smart options: the corresponding tab just gives you a choice between Quick Scan, Deep Scan, and Custom Scan – each one allowing for inclusion of a number of additional objects to monitor. The scan reports are pretty easy to understand and interpret, coming in a somewhat old-fashioned form that’s not characterized by abundance of graphical data representation.

The Manage button gives you the ability to define certain preferences with regard to automated scan scheduling and the items that are allowed to run without getting quarantined. The Tools pane includes auxiliary security features such as Secure File Eraser, History Cleaner and PC Explorer, the latter showing the system settings that are typically hidden.

Therefore, pleasurable setup experience, reasonable computer performance impact and comprehensive controls are the usability components that VIPRE Antivirus 2014 does a good job delivering. “Well done” is how we are inclined to describe this combination.

The protective functionality built into VIPRE Antivirus 2014 presents a challenge to malware authors, and the productivity-oriented measures make it a growingly attractive user choice to make. Despite the fact that the app can’t boast a great many features, it does supply decent defense against infections, and delivers a certain degree of optimized performance.

Like we already mentioned, the feature set is far from abundant, many competitors offering more. Probably the only case when this scarcity can be reimbursed is if there’s unbeatable protection in place. This is precisely what we are going to check in the following section of the review.

Among the criteria for measuring the degree of security software effectiveness, certification by independent testing organizations holds one of the leading positions. In case with VIPRE Antivirus 2014, there are plenty of boxes checked.

It successfully passed AV-TEST certification, with by far not the highest results imaginable, and yet it did okay at overall protection (4.0/6.0 for Windows XP, and 3.5/6.0 for Windows 7) and particularly good in terms of usability criterion (5.0/6.0 for XP, and 4.0/6.0 for Windows 7). However, according to AV-TEST, repair and remediation of critical system changes made by malware is definitely not one of VIPRE’s strong points – it scored 2.5/6.0 by this criterion on Windows XP system, while Windows 7 results look better (4.5/6.0). Although the developers have built targeted anti-rootkit technology into this solution, it exhibits unstable ability of removing rootkits, while detection is fine.

Furthermore, VIPRE Antivirus 2014 has been certified by West Coast Labs and ICSA Labs, and received the VB100 award. These evaluations speak for themselves, so efficiency level is decent across the board. Detection rates for a vast range of threats are remarkable thanks to the truly sophisticated heuristics, behavioral analysis and powerful signature-based engine, but system repair functionality persists to be the only questionable nuance. During our test, VIPRE successfully identified a predominant majority of malware samples, however removing some of those (rootkits mostly) turned out inefficient even after subsequent cleaning attempts and reboots.

General product information and tech support for VIPRE Antivirus 2014 are provided in a comprehensive and easily accessible way. Help opportunities encompass the online knowledgebase (VIPRE SkyNet), forums, extensive product manuals, live support chat, online case submit form, and global phone support. All of these can be accessed both from www.gfi.com website and via the app’s user interface which includes built-in interactive support, suspicious file sending form, and other options. On the whole, we believe quite a few competing programs should follow suit in terms of customer support, because it’s really dedicated and simply excellent.

We really enjoyed the simplicity that seems to have been integrated into virtually every aspect of VIPRE Antivirus 2014. Starting with the program setup, all the way towards assigning system cleaning tasks, scheduling events, interpreting the reported data, submitting a suspicious sample to the labs, wiping some data beyond recovery etc. – you can distinctly sense this ease. In terms of protection, things are kind of dubious: detection is fairly good, but malware cleaning is not as stable as we wish it were. Another thing we can’t help emphasizing is the support which is on an exceptionally high level for every customer, even for trialware users. All in all, VIPRE Antivirus 2014 makes inherently complex protection easily manageable.