An aggressive ransomware campaign involving the so-called FBI MoneyPak virus (Reveton Trojan, Citadel, Trojan.Ransomlock.R) has been reportedly hitting computer users since 2012 and still appears to stick to a steady propagation pattern despite considerable international law enforcement effort to cease the black hat campaign behind it. On its official website, the Federal Bureau of Investigation strongly alerts users on this large-scale scam, providing basic precautions and urging victims to refrain from following cybercriminals’ recommendations reflected on the fake block page that the ransomware displays.

The malware prevalently targets Windows computers, although it was recently found to be affecting machines running Mac OS X as well. The fake FBI block screen states that the user’s PC is involved in illegal activity (such as copyright violations, viewing child pornography, etc.) and demands a fine ($100 or more) to be paid within the period of 48-72 hours for unblocking the system. The prompted payment option is Green Dot MoneyPak prepaid cards, the details on where to purchase those (Walmart, Ksmart, Walgreens, CVS Pharmacy, etc.) being provided on the spoof page itself.

If you are seeing an alleged FBI page identical or similar to the one above which demands you to pay a fine – do keep in mind this is a fake screen. The FBI does not practice this type of law enforcement. Therefore, instead of paying the “fine” it’s strongly recommended to eliminate the malicious software causing such activity.

A retrospective insight into the advancement of this virus shows that there have been quite a few updates to its modus operandi and the external manifestation.

Now that we have reviewed the facts generally known about the FBI MoneyPak virus, let’s get more down-to-earth and list additional symptoms of the infection in terms of the hazardous influence it may have on the targeted computer.

There are several ways to clean up an infected machine. The most efficient method for the FBI MoneyPak virus removal is by utilizing some of the top rated security software (see our rating) which have proven successful in combating the FBI scareware.

Note: If none of these methods work for you – you can’t enter to Safe Mode or the ransomware blocks all your actions – try to create bootable USB drive (read the guide).

Below we will show how to remove the FBI virus with the help of Malwarebytes Anti-Malware. Due to peculiarities of this infection, automated removal should in some cases be combined with certain manual interference, which we will outline in this section as well. The benefit of using this method is twofold: it allows temporarily bypassing obstruction of the virus and enables accessing the Internet for downloading removal software. Here is what you need to do: 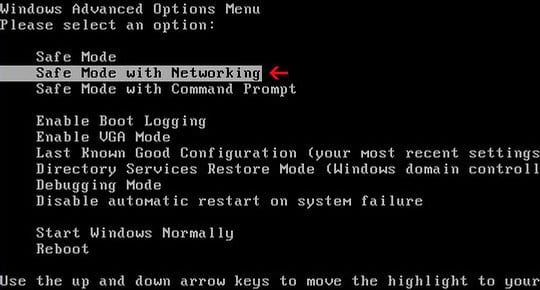 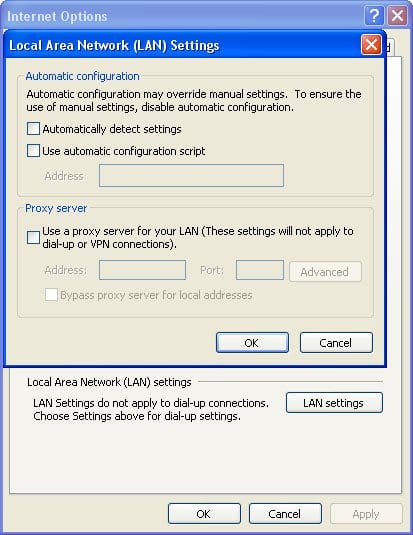 – When Internet Explorer is launched, go to Tools – Internet Options – Connections. Click LAN settings and uncheck the box next to Use a proxy server for your LAN item. 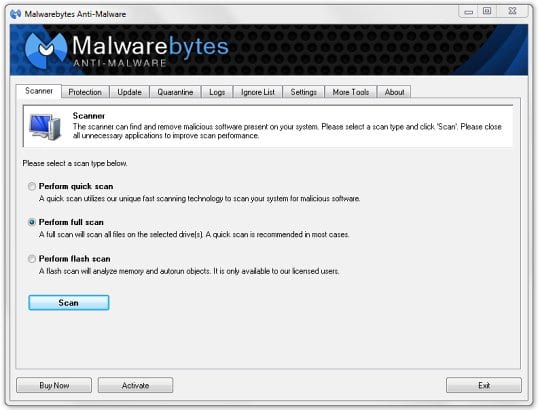 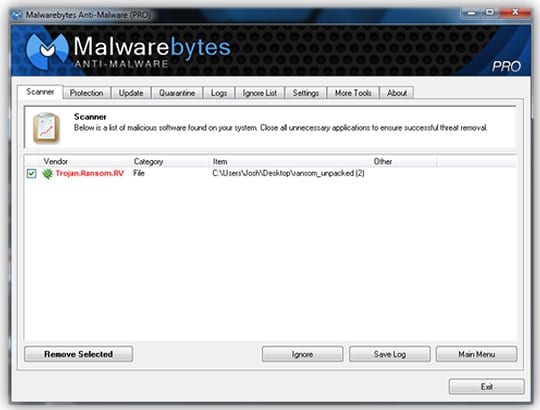 If you are unable to establish an Internet connection but your Desktop appears to be accessible in Safe Mode so that you can install Malwarebytes (download the installer using another clean computer, write it to a USB drive and install on the infected machine), then launch a virus scan and get the FBI MoneyPak threat removed.

This option will enable you to recover your system to an earlier point, i.e. before the virus actually started affecting it. When restoring your OS, no saved personal files will be lost. Here is what needs to be done:

If you are an advanced user you can do it manually by performing multiple consecutive actions with your system. Although fairly burdensome and not always as effective as anticipated, performing removal of the FBI MoneyPak virus manually might do the trick as well. This method is intended to delete the bad processes and files in order to eradicate the infection. Downsides of this option may include difficulties locating the malicious files process names (they may vary) as well as severe interference of the malware with your attempts. Stick to the step-by-step guide as follows:

In different occurrences of the virus, it is known to have used a broad set of files and process names. Below is a complete listing of those. If spotted inside the directories above, these objects should be deleted:

• It’s now recommended to proceed to downloading and installing Malwarebytes or any other reliable antivirus software. Run a scan and get the detected malicious objects removed (see Security Software cleanup instruction above).

If none of these methods work

Finally, if you are unable to enter to any type of Safe Mode or the ransomware blocks all your actions – proceed to our guide on How to remove the FBI MoneyPak Virus if Safe Mode doesn’t work.