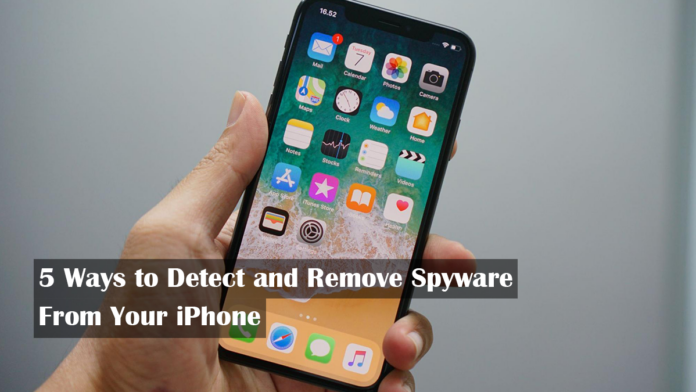 Spyware is a sneaky software that can secretly get your personal information on the phone, including your passwords and even your credit card details.

So, how do you detect any of the iPhone spy apps on your phone? Well, that’s what this guide is all about. It shows you exactly how to detect spyware on your phone and how to get spyware off your phone.

The 5 Best Ways to Detect Spyware on Your iPhone

Following are some practical ways of detecting spyware on your phone. Since some of these are common problems among general mobile phones, you should only be worried about spyware if your smartphone matches many of these indications.

1. Your Phone Becomes Much Slower All of a Sudden

Regardless of how powerful your phone is, it won’t be fast and responsive anymore as soon as it gets hit by spyware. You might feel a slow response rate and sluggishness. The crashing and misbehaving of apps is another sign of spyware. Also, note that the security apps generally get hit firstly, so they don’t stop working because of the virus.

2. Your Data Gets Over Sooner Than Usual

If spyware gets over to your phone, it’ll be consistently uploading data to an online server. This way, you’ll soon notice a boost in internet usage, indicating that spyware is present in your device.

The best way of making sure of that is by either installing an internet limiter app or simply noticing the internet usage with the average usage in mind. It’ll surely give you a sign if there’s a significant increase.

You can also check your internet usage from your device’s settings and tally it with how much data the other apps on your iPhone use. If you notice a discrepancy, there could be a chance that your iPhone is infected with spyware.

3. Your Phone’s Battery Drains Out Much Faster

If you feel that your smartphone’s battery has started draining very fast recently, you likely have spyware on your phone. Since the software keeps running in the background, another common thing that takes place is:

4. Your Phone Heats Up Even When Not in Use

Again, since spyware keeps running in the background, it will keep on consuming the hardware resources of your smartphone, which results in heating up even when not in use.

If you feel that your phone is overheating without a hot environment or overcharging, the problem could be the spyware. If you notice this happening, especially when your phone is lying idle without being used, there is a good chance of a malicious app running in the background.

5. You Notice Suspicious Changes on Your Phone

These could include the annoying behaviors of the apps, the overall smartphone, and know that spyware mostly affects the settings like customizing your homepage, etc. It helps spyware with performing at its best in tracking and sharing your information with a third party. Sometimes, you could also notice strange new apps on your phone, which could be another sign.

If you’re pretty sure your smartphone has been hit by spyware, the question arises “how to get spyware off your phone”? Let’s find out:

How to Remove Spyware from Your iPhone

The following are the most effective methods for getting spyware off your cell phone.

First thing’s first, as spyware is a virus or threat to your device, a versatile antivirus app helps you fight this kind of apps and remove them from your device as soon as they’re detected.

But not every antivirus app will be effective against spyware, so you need to install one. The best option for the removal of spyware from your phone is Avast. Whether you use an iPhone or Android, you can download it for both.

You can download the app for free, as well as to detect and remove spyware using it. However, the premium version is recommended for the best experience.

Quite similar to antivirus, anti-malware is a tool used to detect malicious software on your device and remove them.

But what sets a virus and malware apart is that virus is a more specific form of malware that works by putting its code into other programs, while malware is a collective form of any malicious software.

However, an anti-malware tool is even more versatile and allows protection against a wide range of malicious software that includes spyware.

The top malware-protection option I could find is Malwarebytes. It’s an all-in-one security kit to prevent your smartphone from threats thoroughly.

3. If All Else Fails, A Factory Reset Is the Way to Go

If spyware has gotten complete control over your cell phone and the phone has reached the phase of suspicious changes like the crashing of apps, a complete factory reset is the way to go. It refers to the software restoration of your smartphone. The process erases all the information stored on it. Since the spyware is also stored in its storage, it gets cleaned up as well.

The method for factory reset for a phone depends upon the OS and the OS version.

However, the general method is always by

Alternatively, you can also choose to rest your iPhone through the phone’s settings.

If you want to make sure no one can break into your secret information like credit card details, phone number, emails, messages, call history, and so on., it’s important to make sure your phone isn’t messed up by some malicious app like spyware. This guide lays down complete information on how to detect spyware on iOS devices, as well as removing spyware from your cell phone. These apps can be dangerous in the wrong hands, as they provide access to your sensitive and private information, as researched by Miloš Jovanović from RealSpyApps.com. So, take all this information and be vigilant about any of the signs of spyware on your iPhone.

The Lifecycle of Cybercrime